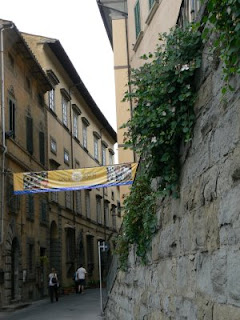 Alas, the Tuscan Sun Festival and Robert Redford have come and gone...fluttering away like fallen caper blossom petals to notes played by Joshua Bell.
The other day while out for a morning walk, Carlotta and I noticed that the wall at the end of Via Nazionale had lots of blooming caper bushes! The caper flower is beautiful with papery large white petals and delicate burgundy stamens. It was getting late, we didn't have our camera with us so we put it off. Today we went to the wall armed with camera...all blooms were wilted at best and alas no pictures! At least not today, there were some big fat buds that looked promising but not for today.
And this was the spirit of curiosity and amount of success we had getting a "sighting" a glimpse, a "my touch with greatness" moment while strolling the streets and casually hoping to bump into Robert Redford. Much like the time that Oprah was at the market and run as I did from square to square and displays of wares, alas, I did not get an upclose and personal moment. This is not to say that we haven't had our chances here in Cortona! I did see Cicely Tyson one day at the market-Malcolm McDowell is a good friend of a friend. Of course we have our own home grown celebrity- Lorenzo Cherubini the songwriter/singer better known as Jovanotti who introduced Italian Rap. Rumor has it that Moto GP champion Valentino "The Doctor" Rossi and friend of Jovanotti has just bought a house here and once I had lunch once at "The Antica Trattoria" with Catherine Spaack and Orso Maria Guerrini. The Queen Mother, bless her soul stopped by to visit us, as well as past pope John Paul II. All these little nods from the realm of celebrity hint that there could be something here worth seeing, enjoying, experiencing.
Tracy Chapman held a concert here-but nothing meant more to me than peering out of a friend's piazza facing balcony window to enjoy one of Lionel Hampton's last European concerts and admiring the verve and showmanship of this great-He didn't want to let down the standing room only humanity packed piazza- hopping and bopping back on stage to Give them More! and more again-
Cortona, "piccola grande" Cortona- has pulled a few stars into its orbit.
And so, August 10th is San Lorenzo's feast day, and the night of the shooting stars- Days that blaze hot-and the evening is to be spent finding a nice dark place (preferably with a good friend) and searching the heavens for shooting stars-blazes of light-to fill hearts with wishes and promises.
There is unfortunately a not so romantic side to this tale. They say that when Saint Lawrence was martyrred he was burned on a grill...YIKES!! to underline his unwavering faith, we are told that his last words were (and to paraphrase) "Turn me over, this side's done"---anyway, the shooting stars are supposed to represent the sparks.
The Comune together with the MAEC museum, the Cortona wine producers association as well as tourist promotional groups got a great idea. Organize a festival at our Fortezza Girafalco at the top of town. So from 6pm to midnight there were shuttles moving people up and down to gaze at the stars and look for hope.
The weather has been HOT, HOT, HOT and our minds turn toward foods which are constellated by capers. Vitello Tonnato-cold roast beef dressed with tuna sauce spiked with capers, Insalata di 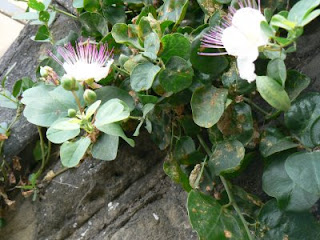 Riso, that classic Italian picnic dish, rice dressed with olives and olive oil, onion , pickles , tuna, cheese, ham, and then those drab green little buds, oddly fragrant, salty -sour. The warm origano spiced tomato and melted mozzarella of the pizza Napoli flavored with anchovy fillets and capers .The impossibly miniscule capers served with lox and cream cheese, perhaps on a bagel. The pickled caper fruit has become a mainstay as a cocktail aperitivo along with pretzels and peanuts- substituted by for the onion or olive in a martini.
So why do we have to search high and low for celebrity and notariety? It grows here wild on the walls. Each little bud had the potential become this beautiful flower!

Cortona is the county seat of one of the largest comuni in Italy. The city administration is in charge of 324 sq. KM. That's a lot of land populated by about 30,000 people. 2,000 or so of these people live within the city walls of Cortona 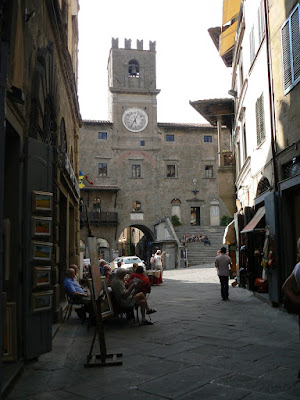 This is a picture of the town hall of Cortona.This is the view of the town hall which can be seen as you approach from Via Nazionale, ancient east-west road. Via Nazionale is of course a new name inspired by unification of Italy as the United Kingdom of Italy under the House of Savoy which happened in 1861. There had been many previous changes in government over the centuries which translated into changes in the architecture of the town hall. We'll tell you more about that another day.
Getting back to the history of Il Palazzo Comunale...
It was constructed more or less on the crossroads of ancient Cortona. In Roman times it was common practice to plan and construct a main east-west road (decumano) and north-south road (cardo) in each town and the place that would serve as the gathering point to make city government policy would be planned at the crossing point. The Cortona comune lies more or less at that point. Thus, it was the habit of former mayor, Ilio Pasquì, when welcoming visitors to the city in the formal Sala dei Consigli (Council Chambers) to open his speeches with the phrase, "Welcome to the cradle of Western Civilization..." 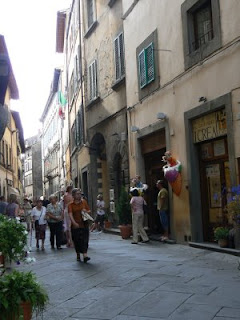 The Via Nazionale or Rugapiana as it is called by the local folk is one of the liveliest streets in the city. It is where people go to see or be seen, gather the latest news and announcements and sadly, discover who from the community is no longer amongst us. The cynical would say that it's where the show-offs go to display all the new things they have, new shoes, new clothes or new babies-however, one most remember that the local paper "L'Etruria" comes out only every 2 weeks making fresh info and local news a rare commodity. The most important function of "la Rugapiana" is to cement the community together-it is the place where you go to seek out your friends. Here are some photos of some of our friends we met on passeggiata (our stroll) in the last few days. The photo to the right is the east end of Via Nazionale. Casa Chilenne is on the right side of the street as you enter the city at number 65. 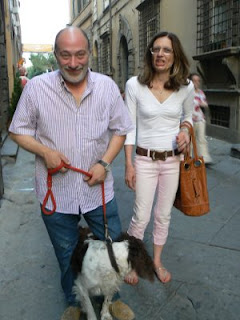 Here are Giulio and Antonella Lucarini out for a walk with Lapo. Giulio is a talented ceramicist who made the beautiful placard for our bed and breakfast with Jeanette's logo on it. 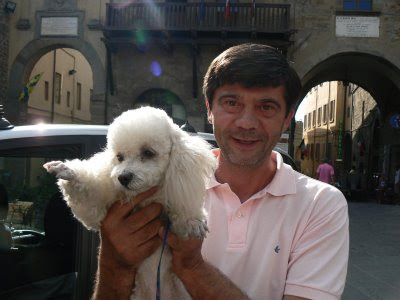 Here's a picture of Carlotta with Enzo the taxi driver. He is her official taxi driver and has accompanied her and Jeanette to Rome twice when she went to visit family and friends in San Francisco. Enzo is just great! 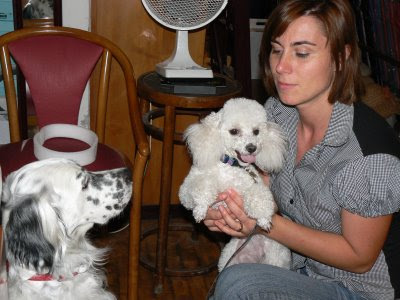 Carlotta went to Enrico's shop to visit her admirer Blue. Theirs is an impossible love story but Blue never gives up. He worships the ground Carlotta walks upon-sure that one day she will be his- 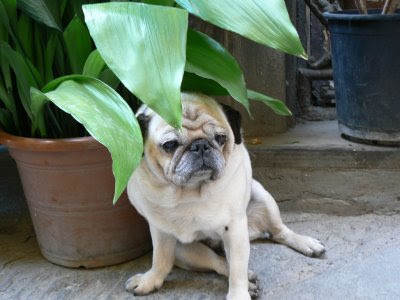 The coolest dog in Cortona by far is without a doubt Bruto. Here he is enjoying the shade and watching the world go by. He's a dog of the world and has been around the block.
Daniela his owner doesn't know how many pictures have been taken of him and how far away they've travelled. He's a star and he knows it-
in the nearly 4 years that he's know Carlotta he just now has started to acknowledge her presence.. 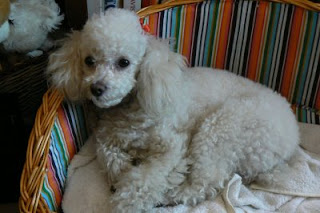 Welcome to Carlotta's Cortona Corner...Carlotta has just taken on the new job of official concierge for her family's B&B- Casa Chilenne at Via Nazionale, 65 in Cortona, Italy.
Cortona has always been a special place which has attracted visitors from all over the globe for centuries. It is a town who's history is archeologically traced to roughly 600B.C. but oral history tells us of origins which can be traced even further back. 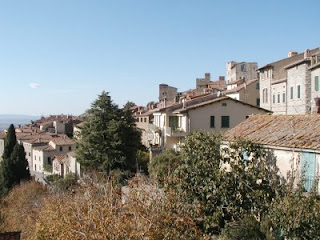 This blog is a place for Carlotta to share her special Cortona with you as well as special friends, four-legged and not, who she would like you to meet in the area.
She hopes to share with you a fresh point of view of her hometown and the people and places that make it special. Please check back for all the latest news!
Pubblicato da Carlotta alle 09:42 2 commenti: