The Road to Freedom

The 25th of April 1945 is the official Liberation Day holiday at the end of World War II.  In the past we have published pictures of the cermonies of rememberance of this day which is special in Cortona because it is also the day of liberation  in 1261 of  Cortona from the control of Arezzo (that nasty neighbor and now head of the province down the road), thus making Saint Mark the patron saint of the city because the 25th of April is his feast day. Those who have followed our earlier posts may remember this.

Last week, I (Jeanette, not Carlotta), had the honor and opportunity to accompany a group of travellers from California to trace events of the Italian campaign of the allied forces in World War II as they fought for control of the country after the King of Italy had signed the armistice agreement with the allies then fled  first to Brindisi and then left Italy for Portugal. Over the years, after living in a land which survived  years of modern warfare on their home soil, I've collected many stories from people who lived during this tragic time and were willing to share them. To give more meaning this year to that long awaited day of April 25, 1945, I feel that it is befitting to share some of these accounts. They were dark times, but I strongly feel that we must remember to really appreciate the value of peace, of diplomacy, of giving a value to human life. I share these stories which were passed on to me as an oral history and write them down here as they were told to me.


What are We Fighting For?

With the announcement on September 8, 1943 that the King of Savoy had signed the Armisitice with the allies and fled to Brindisi, the people of Italy were already starved and strained from the tolls of the war since they entered as part of the Axis with Germany and Japan back in October of 1941, Italy and it's people were now in German occupied territory.
According to my father in law, Oberdan, now 101 years old, he knew on that day he would not fare well as an Italian soldier stationed in Bologna, so he immediately donned his civilian clothes disposed of his uniform and made his way back to Cortona by hitchhiking and walking. His fear was being stopped and captured to be shipped to prisoner and concentration camps in the north.

Oberdan grew up  in San Martino, a small village below the hill of Cortona, his family (especially his mother) wanted to insure him a good education and position in the community and sent him to study in the seminary in Cortona. After he ran away twice, to return home on foot, they gave up on that dream. In the thirties the family was fairly well off with land, but there were few jobs to be had. So Oberdan  enrolled in the army and participated in the Libyan campaign in the calvary division. When war was declared  he was 25 and had returned to civilian life. He was working as a postal clerk when he was recalled to arms. He was considered an "older" veteran soldier and sent to Bologna to work with the military post.

My mother in law Margherita had grown up in Cortona and met Oberdan while working together at the post office there before the war. In the days following the armistice she saw the post office invaded by german soldiers, a bomb planted and the telegraph destroyed to avoid any communications going out. The postal workers were sent home - she returned to the family farm where she lived with her in-laws in San Martino to  wait and hope for Oberdan's safe return.

The family farm was large and had orchards, gardens. They raised chickens, ducks, geese, pigs, a few cows and cattle, and horses. When the war began, the Germans had taken over the farm to become their cooking kitchens. The food supplies were prepared then sent to the soldiers fighting afield, many in Montecassino. In times of peace, the running and managment of a subsistance farm in the tuscan countryside was very different than the way that the german soldiers managed the resources. A single pig was utilized by the italians from head to tail, quite literally using everything but the squeal. In these times of war, Margherita remembered the great hunger suffered by the family and tenent farmers as animals were quickly slaughtered and only the prime cuts used by the germans whilst the rest which could have fed many, were discarded to rot, no one dared to take them back after they'd been seized by the soldiers.

My husband Luciano's grandmother, Pia, was not one who was to take this all in stride. One day exasperated as two of her chickens were being carried off, one in each beefy hand of an enormous German soldier, she sprang upon him from the back her hands gripping his neck crying " And what are we supposed to eat ? La merda?!" Pia was a small woman who did not stand 5 feet tall and her protest was met with amusement by the soldier and his companions as he walked away with his spoils and Nonna Pia clinging to his back. And so she plotted a more subtle revenge.
I lived with my in-laws for 5 years, I was shocked one day as Margherita pulled out a large tin box, as she looked for a good strong spoon to feed the dogs with. The box was filled with stainless steel cutlery all with engraved eagles clutching swastikas on the handles. Nonna Pia had decided that if they were to take her goods, she would collect her own payment and when she had a chance would pilfer their cutlery.

When Oberdan made it home from Bologna a little less than a week after the armistice, the county was now under the martial law of their former allies. It was ordered that all citizens surrender their arms and as penalty for any German life loss to attack by the indigenous people, 10 Italian lives would be taken (woman and children included). Oberdan's youngest brother Betto, who was 17 at the time had been sent with a sack of weapons to be hidden in the mountains to avoid the sequester. The loss of weapons meant a loss of a means of procuring food by hunting, they were too precious to surrender. While on his way, sack slung over his shoulder, he was stopped by a German patrol. Overcome with panic Betto, drew out the pistol he had been given to protect himself and shot one of the soldiers, wounding him, and fled for the hills leaving the precious sack behind.

In the middle of the night, shortly after Betto's escape, my in-laws and all their family were dragged out of bed and out of their house. For Margherita, time seemed endless as they were questioned about the shooting incident. They looked over Oberdan, there was some resemblence but obviously, Betto was much younger. Margherita was sure they would all die that night- but unlike many others, they were spared.


So many had followed Mussolini into believing that they would create a great Empire again, become that great power. Subsidies  handed out to agricultural families and prizes for the birth of more children eased poverty and won him much popularity. Promises that government would be efficient and trains would run on time, a model of modern efficiency in architecture and organization appealed to the fantasy of a powerful future.  They had been lulled into believing that joining the war axis with the Germans was the best choice, They had an up-close view of the strength of their neighbors over the border and had been promised a quick victory. Now they were a hungry, occupied nation, fearing for their lives and hoping for the arrival of liberation.

Oberdan's father, Agosto, reserved wine in his cellar for the English who he hoped would come to save them.

Up on the Roof 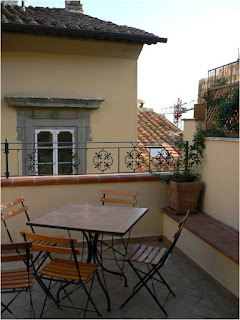 A place that is well loved by our guests is our roof terrace. In the midst of our city we thought it would be nice to have a green spot to sit and enjoy the sunset or sunrise, the company of others with a coffee, tea or glass of wine. Many enjoy having the bird's eye view of the Via Nazionale as strollers and parades pass by.
As you may know, Jeanette loves cooking and having some fresh herbs on hand so you will find rosemary, thyme, sage, lavender, basil in the summer, and whatever can escape her hopelessly brown thumb.  Some guests have found this great for  brewing their own infusions and tisanes, or add a few leaves to sandwiches or salads. We're also excited that it can help support honeybees and butterflies and hopefully sustain our fragile ecosystem.  It seems like a win-win to us. 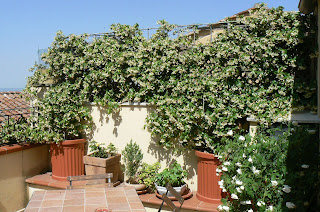 One of the challenges of running Casa Chilenne with the services and amenities we offer is keeping our energy costs down, Our five rooms with air conditioning, mini-bars , televisions, kitchens with ovens, refrigerators, dishwashers, washing machines, not to mention all our lights, leave a gigantic carbon footprint. We've decided this year to make a change which we hope will enable us to keep offering the same services at the same prices, and also reduce the impact that excess energy consumption has on our budget and the planet. Our well-reknown neighborhood electrician, Giulio Moretti and assistant Simone are back again. This time for more than maintenance after our year and a half restoration project here.  We are converting all of our illumination to LED!  We've been happy with the quality of light that these light sources can now produce (warm and inviting, contrary to some of the earlier versions) so we are very excited about this change. We are hoping we have found another win-win situation. 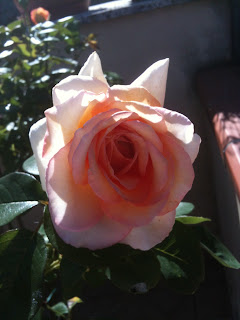 The next project  hopefully for 2018, will be creating a shade structure for the roof terrace and finally repaving to correct the pitch!. It faces south so enjoys full sun all day. Not so great in the summer but the star jasmine and roses seem to be more forgiving than previous victims. We have enlisted the experience of a garden consultant, Francesco, who we have known since he was but a bambino. With his help, We may venture into a little roof top victory garden- will heirloom cherry tomatoes or tuscan round zucchini escape Jeanette's  touch of doom?  The proof will come in the zucchini bread. 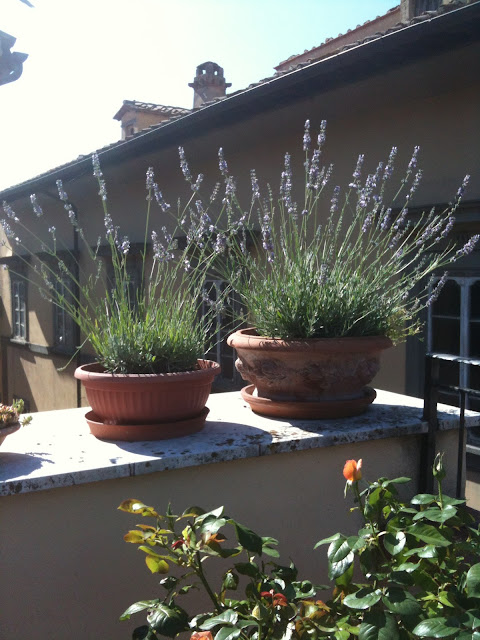