A Handful of Earth 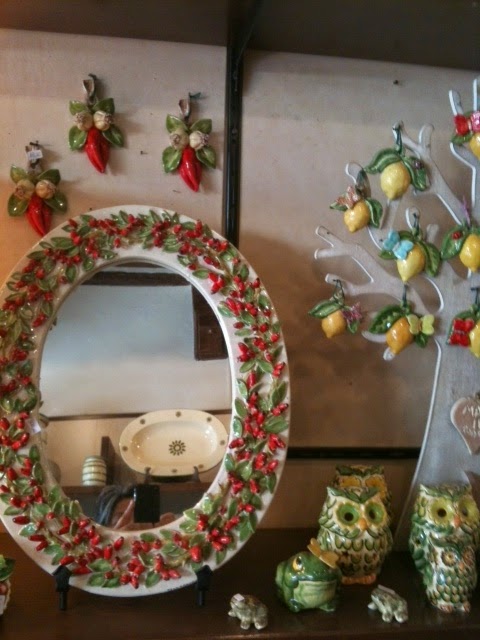 It seems that there is something fascinating and magical in the art of terracotta, or ceramics.  The process of taking this clay rich soil, mixing it with water then shaping and  transforming it into something durable, useful, beautiful is an ancient art which has existed for centuries and centuries. It is a skill, a passion.

The Etruscans, the ancient people who gave Tuscany  it's name and shaped its character as early as 900 BC in some areas were master ceramicists. Many exquisite examples of their craftmanship can be found in museums and collections throughout the world. Probably the most interesting examples were created in "bucchero" a heavy, black ceramic. created to be economic imitations of iron vessels. Bucchero vessels started out as simple red clay vessels which turned black throughout due to the chemical reaction of reduction of the iron oxides in the clay when the pots were fired in kilns starved of oxygen.

There is a neighborhood in Cortona, just outside the city walls which is called Cocciai . This is the neighborhood my husband grew up in after his family left the walled cit, post World War II, when he was five. In local dialect the word "coccio" refers to a terracotta vessel and Cocciai was the neighborhood of the potters.

Besides the traditional pottery for storing oil, water,food and bowls for the household or handwarmers and cooking vessels, the cocciai (potters) made special novelty items for the holidays small whistles for children, some simple, some held water to create a gurgling whistle sound, ocarinas and  other small toys and figurines.

Each medieval town has a maiolica pattern to distinguish it from the others. Orvieto with small birds, Perugia has a dragon design, Deruta pottery traditionally has a rooster. Cortona's traditional pattern is the creamy yellow background with a simple 12 petaled sunflower or some call it a daisy design in green (copper oxide)  and brown (manganese oxide).

I had always been told that the design was a daisy to pay homage to Santa Margherita one of Cortona's two patron saints. However, Giulio Lucarini, the last of the ceramists trained at Cocciai, along with his wife Antonella Fazzini tells different story which traces the sunflower design to the turn of the last century and to the city of Boston in the United States.

According to Giulio's maestro cocciaio, the original design of Cortona was a simple flower, not the 12 petaled flower we see today. It's said that there was a bostonian merchant acquiring wares in the 1800's in Florence and he was taken by the ceramics sold there and produced in Cortona. He was able to procure the address of the producers in Cortona and travelled down from Florence to directly negotiate an export deal. As the merchants travelled through the countryside they were accompanied by Giulio's maestro, Giuseppe Marconi, a young boy at the time, who was given the task of showing these merchant's  the scenery around the area during their visit.  Taken by the sights in the fields around them they asked that a modification be made to change the simple flower to a sunflower design and as they bid the boy farewell, they gave him a tip to thank him for his services which far surpassed the sum of 2 months salary for his father. After that, this young Giuseppe's task was to pack the crates with the ceramics for shipping to Boston, carefully copying the shipping instructions for delivery to the vessel called the "King David". These shipments continued until the Second World War.

Even Cortonese born Gino Severini, Futurist artist of the 20th century, was fascinated by this craft of his hometown. He would make visits to the cocciai to try his hand at sculpture and decoration, leaving them with original designs for them to reproduce on their pieces.
Giulio's workshop is in an alley below his home and the store where he sells his wares is  Terrabruga, on the street level of Via Nazionale. After learning his trade from the artisans of Cocciai, Giulio started his own workshop. Drawing from the generations of experience passed on to him he continues to create the traditional patterned terracotta, like many of the plates we use for breakfast as well as new and modern designs. Antonella, Giulio's wife is especially good at suggesting pieces for Giulio to decorate which fit in as accents to modern tableware  as well. 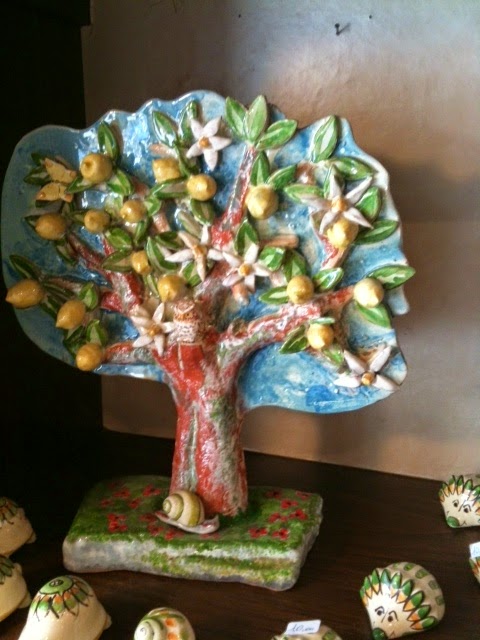 Giulio's love of nature is reflected in many of the "one of a kind" whimsical pieces he creates using the same rough, terracotta to shape and  recreate the flora and fauna of our area in amazing detail. Each piece is unique and is the fruit of his talent, skill and some luck as well. The firing of clay can be a tricky business and not all the pieces he slaves hours or days over make it through the process safely. 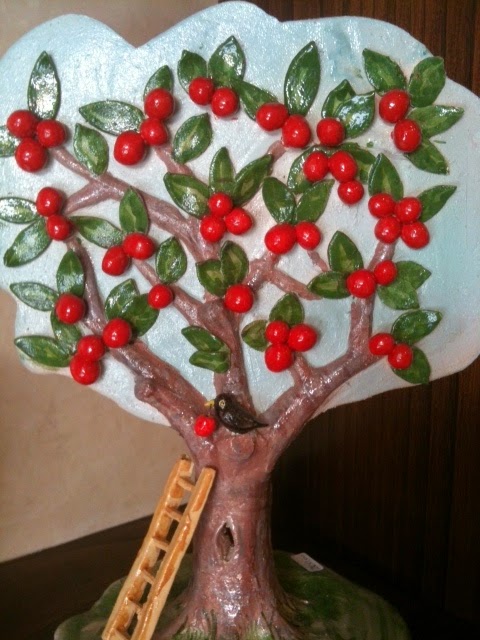 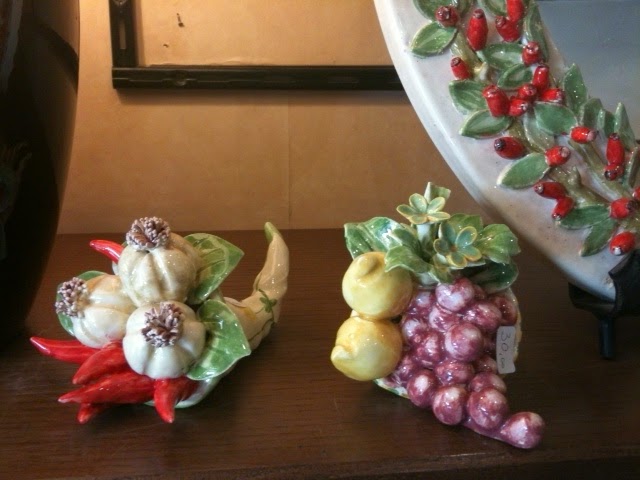 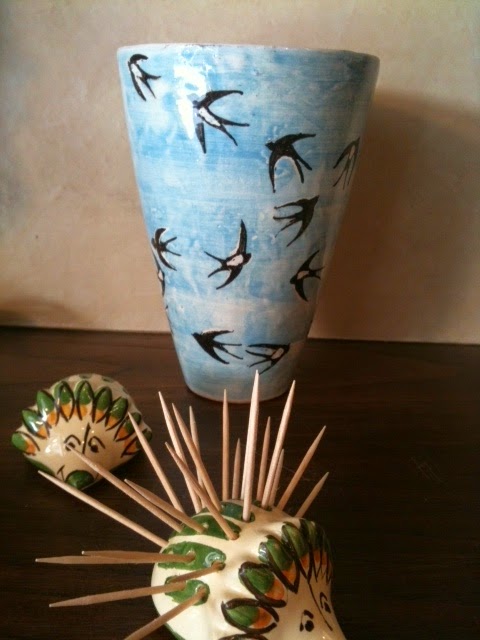 I was once told a poignant story by the descendant of an Italian immigrant to the United States that during the years when Italians were compelled to leave their homeland to search for a better life elsewhere, they would  take a handful of soil with them as they braved the ocean journey to a new life.

So many visitors fall in love with Cortona as they live their vacations here, and so many bring home a piece of terracotta with our daisy/sunflower pattern-perhaps this is a new version of that ritual- a way to keep a bit of this beautiful place in their homes.