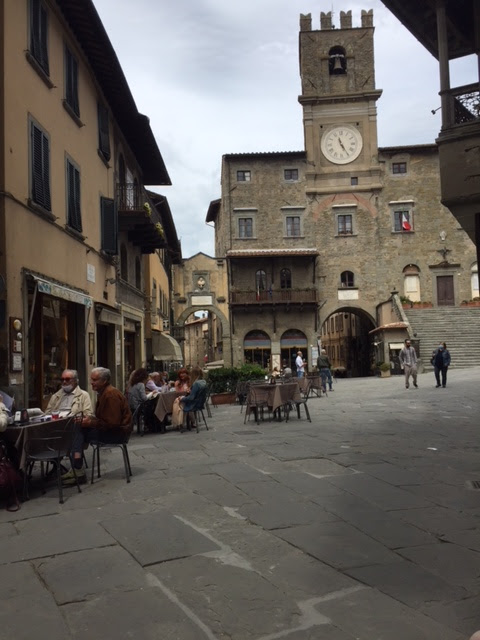 The clock started to move forward again on May 4th from the day we shut down Italy on March 9th. We were delighted that our dog groomer was listed as one of the activities which would be able to open its doors again, along with our accountant and legal offices,  restaurants being allowed to offer take away foods.. On May 18th all other places of business, were allowed to open, hairdressers and esteticians, clothing shops, restaurants and bars were able to start serving food on premises as long as social distancing rules are observed.

Borders to the Schengen countries opened on June 3rd and the borders to other countries will remain closed until at least June 15, at which point the EU will evaluate and see if it is the right time to open borders fully.

In the little more that 2 months that our outside world was put on hold so much has changed.  This strange situation, in many ways a social experiment, confining people within the walls of their legally declared households without a certain end date to this time of confinement. There are things that will remain etched in my soul when this crisis has passed into the chronicles of time.

I will remember this as a time that the people in Italy stopped what they were doing to put value on the mission of preserving lives.  At great personal expense, Italians stopped and sheltered, surprising the world and probably themselves with the collaborative and collective spirit which came together and set the tone for this shut down.

Italians are innately social people, they are also people who have seen the ravages of a war on home soil and the results of collaborating to re-build a nation after, so maybe it  came as a natural reaction.  When friends and neighbors could not reach out with an embrace they reached out with song in the day and also the night, to let others know they were not alone.

These romantic images of Italian communities reaching out to one another with music and song, showing support for our health workers with syncronized rounds of applause throughout the nation, the tricolor aeronautic fly overs , the colorful rainbow banners painted by children telling us that "Andrà tutto bene" Everything will be alright, will remain in my mind as the power of a nation coming together as one.

Now  we have been firmly assured by our Prime Minister Conte that we have started Phase 3, that re-opening of Italy has begun. Perhaps these positive images are starting to fade.  The reality of re-starting a nation which has been shut down for more than 2 months is daunting.  The squabbling and scrabbling for a place of power amongst our politicians has begun.

The status of Italy as a nation, Italy as a member of the EU have been put to the test during this crisis. The Italian philosophy of "Leaving no one behind" collided with the reality that they may not really have the possibility financially to do the right thing by all its citizens.  The systems that weren't working very well, were laid bare to the light.  Besides regretting the numerous cuts to the health care system made in the past, employment and the tax system flaws are glaringly evident. The bureaucracy involved in getting the relief funds to citizens in need was cumbersome and not effective in many places, slowing down the promised aid to those in need. The many inventive ways that Italians had used to create employment for themselves which could not come under the umbrella of plans to protect traditional workers were sorely evident. The government offices which handles the monies offered to employees who were laid off during the crisis were overwhelmed by the onslaught of requests. The promises were many and the actual monies arriving were slow in many cases, especially in the bigger urban areas. Many people were left with no way to pay bills, rent and mortgages. Luckily, many banks , insurance and utility companies voluntarily postponed payments and charity organizations and the government did step in to be sure that food got on the table of those who needed it.

However, I am skeptical that this will be sufficient. I was impressed that the government did try to address many needs of its people. Babysitting  was a concern when the factories and offices started to open again as schools were still closed and it was not recommended that grandparents be exposed to risks if they did not live in the same household. Vouchers for tax credits equal to the amount of babysitting services were offered, layoff compensation for businesses with only 1 employee, stimulus money for freelance workers, as well as small businesses were taken into consideration.  In the prime minister's address  prior to this last one,  an offering of  Vacation Vouchers to families  was announced to aid the tourism industry- however the monies being offered by the government as a discount to citizens translate into an equivalent in tax credits for 2021 to the vacation structures that accept them. The same for a 60% help with rent for business owners- again translating into as tax credit to be used in 2021 or transferred to suppliers or landlord. It seems that a new currency of tax credits is being established in a nation where we are not sure if we can keep our businesses afloat until 2021.

The European Union was called upon by all its members to decide how they were going to help their members through this crisis. Initially, the EU had seemed to be quite unsympathetic as Italy struggled in March to face the Covid 19 crisis, Tensions ran high as Germany blocked shipments of supplies needed at the borders and later when the northern European members seemed to oppose granting emergency funds to the southern members who were hit the hardest such as Italy, Spain and France, insisting that only low interest loans be made. It seems that negotiations have been successful and an recovery fund of 750 billion Euro has been created to assist the nations facing the worse of this crisis, Italy included.  It seems that there are additional funds available earmarked for specific purposes such as healthcare improvements if EU nations wanted to accept it and pay it back with very low interest.

The challenge now will be for government to come together to fix some of the defects which became so evident in light of this crisis. Prime Minister Conte addressed the nation again on June 4th, to confirm that the health impact of Covid on the nation was definitely under control and that the sacrifices and strict measures we had taken were paying off.  He also confirmed that Italy would be opening to the world soon and that all measures were being taken to ensure that people could enjoy the beauty and riches of our nation in safety.

Cortona is opening up again. The last of our bars and restaurants seem to be set to open their doors to business again this weekend. Our citizens on the whole seem to be complying with safety rules of masks and distancing. It was a nearly "normal" weekend last Saturday and Sunday with  bar tables in the piazzas and restaurants nearly full most of the afternoon, many people out for an afternoon stroll and a gelato.  People were out enjoying each other's company (with masks on and at a safe distance).  In the evening the usual locales offer their happy hour apperitifs to enthusiastic clients, happy to be out again.By day the streets are busy again with shoppers and deliveries as we slowly go back to business as usual (with masks). Casa Chilenne, for now, remains closed.


I look forward to discovering what this new Italy will be, the product of the politicking or will something new and better be born?  I guess we can only wait and see.

As I ponder on this, the matter of fact wisdom of the old barber in Pienza comes to mind.  When questioned about his reaction to the number of government changes in Italy, he replied-"We Italians always survive, despite our governments."